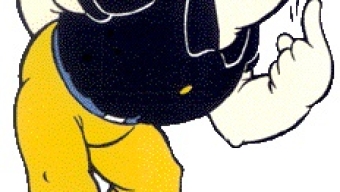 I remember watching Saturday morning cartoons and being horrified by the coyote trying to squash the road runner with an anvil only to have it backfire on him. I hated the fact that the coyote was being so mean, but then again, he was the one actually getting hurt. Bluto on Popeye irritated me as well. Actually, when I was quite young, he frightened  me. I tended to enjoy watching shows like Scooby-Doo, where the villain was someone masquerading as a ghost and the heroes solved the mystery. As I look back as an adult, I wonder…what are TV executives thinking? Some of the shows they produce for children are not things children should be watching. Sure, it’s up to the parents to determine what kids should and should not be watching, but we all know that does not happen. If the studios put it out, kids are going to want to watch it. If parents do not take the time to sit down and watch it with them, then they really do not know what their children are watching.

When my daughter was in kindergarten, it was only a half day program. I would pick her up from school and we would go home for her favorite lunch and to watch PBS. We watched Little Bear, Madeleine and Arthur. As she got older, she would pick out the show to watch and she would have an hour of down time after school to relax before dinner. This is when the cartoon bullies started being a problem for me. First I had to stop her from watching Rugrats. The oldest of the children in the show, Angelica, was a bully and picked on the babies. She was never scolded, never punished and continued to behave inappropriately day after day. The next show she had to stop watching was The Simpson’s. Her father thought it was hysterical. He didn’t have to deal with the ramifications of our daughter repeating things that Bart and his nemesis Nelson would say.

I see way too many students in elementary school wearing South Park t-shirts. As an adult I can appreciate some of the humor in the show, but it is in no way appropriate for children. Eric Cartman may resemble some students I have worked with over the years, but that doesn’t mean it is O.K.for them to behave like him. All through the ’90s and early 2000s, shows meant for children had bullies who never learned not to bully, and when the heroes did take action, they always gave them “a taste of their own medicine”. The victims bullied back or engaged in physical confrontation. Recently companies producing shows for children have been taking a closer look at their scripts and how the bullies and victims are depicted and how situations are handled.

Disney takes great care to have their characters settle disputes in a non-violent manner. Their teen stars speak out against bullying (Cartoon Network does this too; stopbullyingspeakup.com and they actually encourage getting a teacher or other adult for help. they also used to sponsor a program called Verb with the slogan “it’s what you do,” that encouraged physical activity. Disney does this as well, if you notice Phineas & Ferb’s “Cyberspace Rules of the Road” PSA) and they sponsor events focusing on anti-bullying. One of their most popular cartoons Phineas and Ferb, focuses on a set of pre-teen step brothers and their pet platypus. The brothers in many shows would be considered nerds or geeks and would be the victims of the bully. In this show, they are the cool kids in town, creating unique and brilliant ways to spend their summer days. The neighborhood bully is trying hard to reform his ways and has made friends with the small straight A kid in his class (the show typically portrays Buford and Baljeet as having the typical schoolyard bully and victim dynamic, but they actually do care about each other; it’s almost like the Mafia buying a neighbourhood out so that someone worse doesn’t get to you. Buford’s also not as much of a bully in recent episodes. An older episode portrays that he became a bully by defeating the other bully, saving his own pet goldfish, who was his only friend).

I love cartoons. I think they can be a fun way to relax and not have to think too much. I am not a big fan of super-hero cartoons or anime, but I find value in the cartoons meant to entertain without a tremendous amount of violence, anger or bullying. Cartoons are a natural draw for children and they can be used to educate them on how to problem solve, treat others with respect and fairness.